It is with a sense of loss combined with great pride that the Dominican Friars of the Central Province of St. Albert the Great announce the death of our brother, Fr. Chuck Leute, OP, who died on New Year’s Day, January 1, 2021. We joyfully commend our brother to the Lord, trusting that he is at complete peace. A faithful servant of God, who ministered throughout his life to his Native American community, Fr. Chuck preached, not only through his words, but by his witness of service, selflessness, and humility. May his soul and all the souls of the faithful departed rest in peace. Amen.

Charles Joseph Leute was born in Dubuque, Iowa on February 21, 1942, the son of Charles Edward and Agatha Lucy Frommelt Leute. He was one of six children. Chuck, as he was known by all his Dominican brothers, was a descendent through his father of the Sauk and Fox Native American Indians who lived in the Mississippi River area around eastern Iowa. Though raised in urban America, his Native American roots led him to “missionary work” among the poor rural Indian people on reservations in South and North Dakota.

Father Chuck devoted most of his ministerial life to the Native American people on the Northern plains of the United States. In 1968, he worked briefly as a deacon on the Crow Creek Reservation in central South Dakota. But beginning in 1970, he served the Oglala Lakota Indians at Our Lady of Lourdes Mission in Porcupine and then at Sacred Heart Church in Pine Ridge both on the Pine Ridge Indian Reservation. Both Churches are about seven miles from Wounded Knee (site of the famous Wounded Knee Massacre on December 29, 1890) in the southwestern corner of South Dakota. Of the 3,142 counties in the United States, these are among the poorest. In 1986 Father Chuck became associate pastor at Holy Rosary Church in Minneapolis, but in 1987 he then moved to the northeastern edge of North Dakota to become the pastor of Our Lady of Seven Dolors Church, Fort Totten, on the Spirit Lake Reservation and to minister to the Pabaksa, Sisseton and Wahpeton bands of the Devils Lake Sioux tribe. He was assigned there until his death in 2020.

Late in 2020, Father Chuck sought medical treatment for a stomach disorder at the Mayo Clinic in Rochester, Minnesota, south of Minneapolis and was diagnosed with advanced stomach cancer. As his condition worsened, he was moved to Our Lady of Peace Hospice Center in St. Paul where he died peacefully on January 1, 2021, the Solemnity of Mary, the Holy Mother of God.  How fitting, given Fr. Chuck’s profound devotion to Our Lady. Father Leute’s funeral (date to be determined) will be at St. Albert the Great Parish and he will be buried in the Dominican plot at St. Mary’s Cemetery, Minneapolis.

Father Leute was a member of the National Association of Native Religious, religious men and women of native American ancestry. Chuck loved the people he served all his life, and he loved the land where he lived. He enjoyed singing, hiking, gardening and ranching: actually, most anything that had to do with being outdoors. 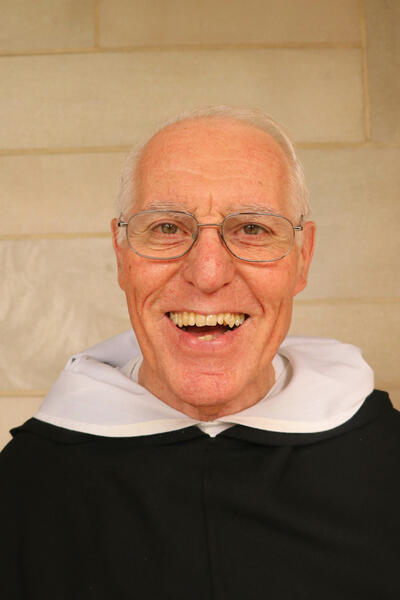