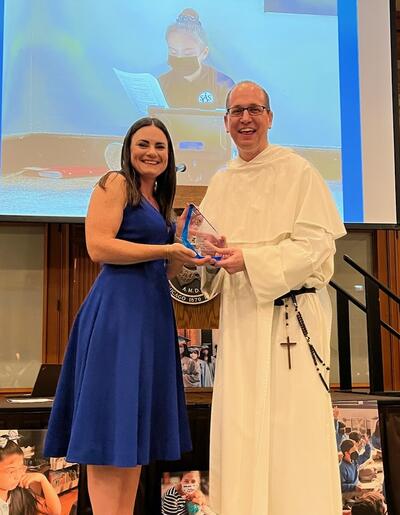 Fr Brendan Curran, OP was awarded the “Serve Lead Love” award for 2022 by St. Ann School for his advocacy on behalf of an Illinois tax credit scholarship program which raised over $75 million in scholarships for more than 9000 students in the past year.

Working for The Resurrection Project, Fr. Brendan was a key voice in statewide coalition which pulled off a unanimous vote in the General Assembly for HB 4126, a bill to create two key improvements for families on the scholarship – a super priority for families on the scholarship in and a partial scholarship to help alleviate the waiting list of over 25,000 students each year. During his acceptance speech, Fr Brendan said that the award really goes to all the parents and students who wrote letters, got tested, and traveled to Springfield during the pandemic to give witness to the effectiveness of the scholarships.

Fr. Brendan was given the award at the St. Ann School Gala de Mayo by the school’s principal, McKenna Corrigan, who noted that her school of 200 students will receive 90 scholarships next year, the highest in its four-year history. Ms. Corrigan also reminded the guests that this is not Fr. Brendan’s first legislative success. He was instrumental in passing the 2013 Illinois bill that granted driver’s licenses to undocumented workers. (Illegal immigrants cleared to hit the roads – Chicago Tribune)