On this first Sunday of Lent, the Year of the Holy Cross begins in Ukraine, as announced by the Roman Catholic Bishops. In reality it began on Thursday February 24 at 4am, when the first Russian rockets hit Ukraine. “Now, like never before,” write our shepherds, “we understand Christ on his way of the cross.”

On Saturday, most of us were involved with shopping and helping people who are suffering as a result of the war. It takes a lot of time and strength. Father Alexander and a bunch of volunteers took a van that belongs to Caritas and were evacuating people from Irpin. This city, located almost 20km northwest of Kyiv, was bombed and destroyed by the Russians. Over the last couple years, the city has been growing dynamically, and like Kyiv, attracted many young people and families. Today, a large number of the inhabitants of Irpin are without a roof over their heads. When the fighting subsided in that area, the city authorities and volunteers rushed to help these people.

In the evening one of the volunteers from the priory joined me, and we went to the train station in Kyiv. Inside, enormous crowds; and the rail station is huge. In most areas, the lights are off for security reasons. The station is filled with noise and semi-darkness. People’s conversations mix with announcements flowing from the loudspeakers about the arrivals and departures of trains. The travelers must listen very carefully, because these announcements are the only way to learn anything. The crowds at the station consist mostly of families and mothers with children. Some of these children are so tiny that they should be sleeping in their beds at this time of the day. I passed by one dad who very calmly but strongly told his little children, “Hold very tight to your mom.” Getting lost in this situation is a tragedy. Many children sit around with phones in their hands. Video games. Children at play. There is some comfort in it, some chance to distract them even for a moment from the reality around them. Not far from the train station, there is Okhmatdyt, the children’s hospital famous in all of Ukraine. It stays open all the time, although it has been bombed already. The railway stations also have their share of elderly; I saw some people in wheelchairs. Somebody had a dog on a leash. My brother Mariusz, who is a religious, too — a Paulist — serves and lives in Lviv. He told me in the morning that the railway station in Lviv is surrounded by many dogs. The refugees who couldn’t take them any further left them with the hope that they would find new owners.

When we returned to the priory, we had to go straight back to the car again. Our cook, who is living with us during the war, fell on the steps. We were afraid that she might have broken her hand. We called the ambulance, but ambulances don’t go to cases like this during the war. We were given the addresses of the two closest hospitals. It was already after 8pm, which means curfew, which means we cannot leave our homes. What could we do? I put on my white Dominican habit and went to the closest intersection guarded by the territorial defense. Our boys, seeing me, immediately took a defensive posture with weapons. I spread out my hands so they could see that I meant no harm. We talked for a while and agreed that someone has to take a car and drive to the hospital because the lady should not stay in pain overnight. They advised me, however, not to drive too fast and to slow down even more at every checkpoint. The streets were completely empty, so we got to the emergency room relatively quickly. Our cook did not break her hand after all, only strained it. The surgeons did their job, and we could come back. The same route, the same checkpoints and questions. Despite the fact that most lights are off in the evening, patients are still in the hospital. Not all of them are victims of war. The emergency room crew reminded me that people still get sick with normal diseases. It made me think that in the present situation, that’s one of the worst things that could happen to someone. And what are people cut off from the world by fighting supposed to do? I try not to think about it.

I talked for a little bit with the police officers guarding the hospital. In Kyiv, the Dominican habit usually causes curiosity and surprise; in war time, frequently suspicion. A short explanation usually suffices; the Eastern Churches also have monks and monasteries, so we are usually treated with a certain sympathy. At the end of my short conversation, the officers asked for a blessing.

It might take a miracle to talk to Misha in Fastiv today. So far, I couldn’t get a hold of him, so I will try to write about Fastiv in the next letter. I’m not surprised; it’s Sunday and war, but it’s also his birthday. I do hope for a miracle.

Last night the train with supplies from Khmelnytskyi arrived to us. We are very grateful to our friends from the parish of Christ the King, where our Dominican brothers serve; and to it’s pastor Father Nicholas, for sharing with us what they received themselves. It’s almost a ton of food. Father Alexander took most of it in the morning to the priory of the Capuchins. (It’s across town on the east side of the Dnieper.) That way, the food will find its way to the people who need it the most. Some of it stayed with us however, and this morning we had delicious steamed sausages from Nowy Sacz for breakfast. Most of the supplies brought by that train are things from Poland. We are grateful to all the hearts and all the hands from my country who purchased and shipped the “treasures.” We’ll keep the kabanos for a rainy day. The vocational ministry of the Polish Dominican Province recently added a couple of video greetings for Ukraine and for us. We are very grateful to the Dominican nuns from Radonie, Swieta Anna, and Grodek, sisters from the Congregation of the sisters of Saint Dominic, and brothers from Ireland and Germany. In Jerusalem the brothers prayed for us at the tomb of the Lord. The lay Dominicans, sisters and brothers from many fraternities in Poland, surround us with their prayer and strengthen us with their fasting and almsgiving. Here is what Zosia wrote to us: “I’m a member of the Family of the Mother of Sorrows, which in 1999 was received by the provincial and his council into the Dominican Family. Among the members of this community are people who have long-term diseases, some who are handicapped physically, and some who are completely healthy. Since the war started in Ukraine, we’ve been praying every day for you and for peace. Today in a particular way, we would like to embrace the Dominican sisters and you Dominican brothers (over there in Ukraine), offering, besides our prayer, everything we experience today — pain, difficulty, and suffering (some of us suffer very much) — in your intention, placing you into the offering of Christ.” What a great solidarity in suffering with those who were wounded physically, psychologically, or spiritually. Thank you!

This afternoon the sky over the priory in Kyiv is full of birds. I don’t know if it’s a sign of the coming spring. I’ll ask Father Peter, who is an expert on the New Testament, but also on nature. The birds nervously jump, make noise, and burst into flight every time we hear distant explosions. Father Thomas Slowinski in Lviv wrote today on his Facebook profile, following the words of Jesus, “Do not be afraid: You are more important than many sparrows.”

With greetings and request for prayer,

You can donate to the Dominicans in Ukraine online today using the form below. Select "apply my gift to" the St. Dominic Mission Society and  write "Ukraine" in the comments. 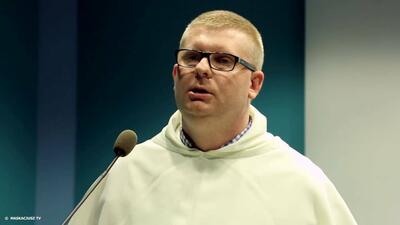