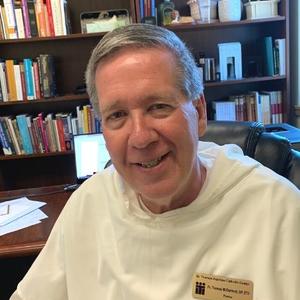 Father Tom is pastor of the Catholic Center at Purdue University. Growing up in northeastern Nebraska and after graduating from St. John’s University in Collegeville, MN, he entered the Dominicans in 1977. His novitiate year was in Denver, and his studentate years were spent in Dubuque, IA, and St. Louis, MO, where he was ordained in 1983.

Father Tom’s first assignment in Lagos, Nigeria lasted 18 years in various capacities, including parochial vicar, pastor, prior, and prior provincial. Studying at the Angelicum in Rome, Father Tom received a doctorate in spiritual theology in 2005 with his dissertation on Catherine of Siena. After 22 years abroad, Father Tom returned to the States to teach at Aquinas Institute of Theology and Kenrick-Glennon Seminary, eventually serving as its director of spiritual formation. In 2012, Father Tom became pastor of St. Vincent Ferrer Catholic Church in River Forest, IL where he also serves as a Catholic chaplain at the Cook County Jail. He is a writer and editor of several books about Catherine of Siena and author of an introduction to Catholic spirituality book titled “Filled with All the Fullness of God.” His hobbies include reading, history, and beekeeping.