The next installment of our Dominican Month for Peace in Venezuela series for the Second Sunday of Advent. Also available in Spanish. 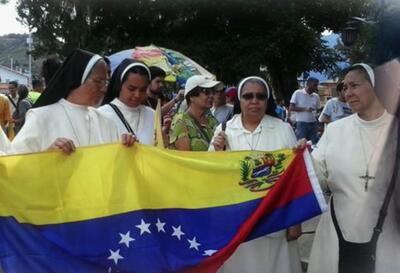 In today’s readings we hear the voice of John the Baptist, “As it is written in the book of the words of Isaiah the prophet: "A voice of one calling in the wilderness, 'Prepare the way for the LORD, make straight paths for him. (Luke3:4)

For 40 years Venezuela promoted an idea of democracy with its consequent system of freedoms in Latin America, President Hugo Chavez went on to promote the "Socialism of the XXI century" an unclear idea that seemed to be subordinated to the Cuban communist regime, in which, strangely, a richer, larger and more modern country submits politically to the dictates of a smaller one, this fractured national sovereignty.

At this moment, it is difficult to mention one aspect of Venezuelan life that has not been affected by the desire of President Nicolás Maduro's regime to control everything. Yet, Venezuela’s oil industry, once one of the top five producers in the world, has grinded to a halt. Venezuela, Once an Oil Giant, Reaches the End of an Era - The New York Times (nytimes.com) . Media is among the most affected areas, with 90% of the print media disappearing, the country's oldest television channel being taken off the air and journalists who dare to raise their voice being persecuted with full force for their work.

Just one example is the tragic struggle against the pandemic. The government claims that 80% of population will have been vaccinated. See link: Cuba Ships 1,5 Million Abdala Vaccines To Venezuela | News | teleSUR English. Yet world scientists give a far more dire report of vaccination. Only 32 % of the population has been vaccinated as of November 12, 2021. See one such report:

Venezuela, like other countries today, can be driven by ideological currents. Our Dominican Family in Venezuela describe the government as a totalitarian regime with democratic structures that have been eroded. Human Rights Watch evaluated the situation in grave terms. World Report 2021: Venezuela | Human Rights Watch (hrw.org)

In this time of Advent, the voices cry out in Venezuela to be heard.   May we as Dominican Family and the world community join our voices in solidarity for dignity and respect for a bright future for Venezuela.