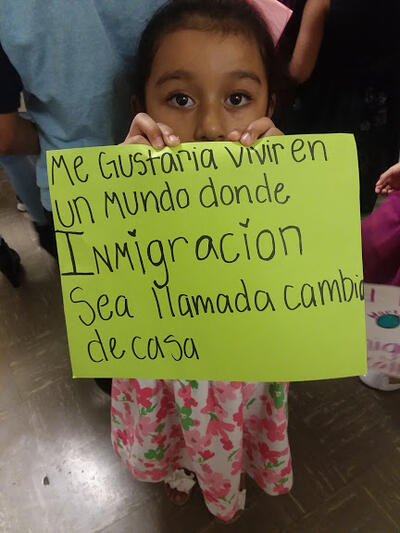 Above, a video by Pope Francis, "Migrants and Refugees.

“Immigrant” is not a term used universally: though common in North America to refer to those living in a country other than their birth country, other terms frequently used include "international migrant," the "foreign-born," and "migrant." National statistical agencies base their counts of migrant populations on the number of people who say they were born in another country and/or who hold the citizenship of another country.

In casual usage, “immigrant” can refer to any foreign-born person, but in the United States, some are technically considered “nonimmigrants.” While immigrants intend to stay in a new country permanently, nonimmigrants remain only temporarily, whether that’s for a few days on a business trip, a few months as a seasonal worker, or a few years as a student, missionary, or religious work. Those considered immigrants also include a range of people with different legal statuses. These statuses are not identical, but are often comparable, across different receiving countries.

(From Paragraphs 33-38, Strangers No Longer: Together on the Journey of Hope: A Pastoral Letter Concerning  Migration form the Catholic Bishops of Mexico and the United States)

Leviticus 19:33-34
If a stranger lives with you in your land, do not molest him.  You must count him as one of your own countrymen and love him as yourself – for you were once strangers yourselves in Egypt. I am Yahweh your God.

Isaiah 10: 1-2
Woe to the legislators of infamous laws, to those who issue tyrannical decrees, who refuse justice to the unfortunate and cheat the poor among my people of their rights, who make widows their prey, and rob the orphan.

Jeremiah 22: 3
Yahweh says this: Practice honesty and integrity; rescue the man who has been wronged from the hands of his oppressor; do not exploit the stranger, the orphan, the widow; do not violence, shed no innocent blood in this place.

Matthew 25: 35-40
For I was hungry and you gave me food; I was thirsty and you gave me drink; I was stranger and you made me welcome; naked and you clothed me; sick and you visited me; in prison and you came to see me. …I tell you solemnly, in so far as you did this to one of the least of these brothers of mine, you did it to me.

Galatians 3:28
…there are no more distinctions between Jew and Greek, slave and free, male and female, but all of you are one in Christ Jesus.

Pacem in Terris (Pope John XXIII, 1963)
Every human being has the right to freedom of movement and of residence within the confines of his own state. When there are just reasons in favor of it, he must be permitted to emigrate to other countries and to take up residence there. The fact that he is a citizen of a particular state does not deprive him of membership in the human family, nor the citizenship in that universal society, the common, world-wide fellowship of men. [25]

It is not irrelevant to draw the attention of the world to the fact that these refugees are persons and all their rights as persons must be recognized. Refugees cannot lose these rights simply because they are deprived of citizenship of their own states. [105]

Among man’s personal rights we must include his right to enter a country in which he hopes to be able to provide more fittingly for himself and his dependents. It is therefore the duty of state officials to accept immigrants and – so far as the good of their own community, rightly understood, permits – to further the aims of those who may wish to become members of a new society. [106]

Gaudium et Spes (Second Vatican Council,1965)
When workers come from another country or district and contribute to the economic advancement of a nation or region by their labor, all discrimination as regards wages and working conditions must be carefully avoided. All the people, moreover, above all the public authorities, must treat them not as mere tools of production but as persons, and must help them to bring their families to live with them and to provide themselves with a decent dwelling; they must also see to it that these workers are incorporated into the social life of the country or region that receives them. [66.1]

Laborem Exercens (Pope John Paul II, 1981)
The person working away from his native land, whether as a permanent emigrant or a seasonal worker, should not be placed at a disadvantage in comparison with the other workers in that society in the matter of working rights. Emigration in search of work should in no way become an opportunity for financial or social exploitation. As regards to the work relationship, the same criteria should be applied to immigrant workers as to all other workers in the society concerned. The value of work should be measured by the same standard and not according to the difference in nationality, religion or race. [23.2]

A statement of the U.S. Catholic Bishops and Conferencia del Episcopado Mexicano
Strangers No Longer: Together on the Journey (Jan. 22, 2003)
We stand in solidarity with you, our migrant brothers and sisters, and we will continue to advocate on your behalf for just and fair migration policies. We commit ourselves to animate communities of Christ's disciples on both sides of the border to accompany you on your journey so that yours will truly be a journey of hope, not of despair, and so that, at the point of arrival, you will experience that you are strangers no longer and instead members of God's household. We pray that, wherever you go, you will always be conscious of your dignity as human beings and of your call to bring the Good News of Jesus Christ, who came that we "might have life and have it more abundantly" (Jn 10:10). We invite you who are forced to emigrate to maintain contact with your homes and, especially, to maintain fidelity to your families so that you treasure your cultural values and the gift of faith and so that you bring these treasures to whatever place you go. [106]

Address to the Participants in the Plenary of the Pontifical Council for the Pastoral Care of Migrants and Itinerant People (Pope Francis, May 24, 2013)
“The Church is Mother, and her motherly attention is expressed with special tenderness and closeness to those who are obliged to flee their own country and exist between rootlessness and integration. This tension destroys people. Christian compassion—this ‘suffering with’ compassion—is expressed first of all in the commitment to obtain knowledge of the events that force people to leave their homeland, and where necessary, to give voice to those who cannot manage to make their cry of distress and oppression heard. They are all elements that dehumanize and must push every Christian and the whole community to concrete attention.”

Address to Joint Session of Congress, Washington, D.C. (Pope Francis, September 24, 2015)
"Let us remember the golden rule: do unto others as you would have them do unto you."
"Let us treat other with the same passion and compassion with which we want to be treated."
"We, the people of this continent, are not fearful of foreigners, because most of us were once foreigners."
"If we want security, let us give security. If we want life, let us give life. If we want opportunity, let us provide these opportunities."

Interview at the U.S./Mexico border (Pope Francis, Feb 18, 2016)
"A person who thinks only about building walls, wherever they may be, and not building bridges, is not Christian. This is not the gospel," the Pope told journalists who asked his opinion on Trump's proposals to halt illegal immigration.