In offering a short reflection on the 800th Anniversary of the death of our brother and father Dominic, during this Jubilee Year in which the Order is celebrating his “holiness,” I find myself moved more by silence and wonder than by any words which, only inadequately, can express something of who Dominic is to me, never mind to others. However, I have committed myself to put a few thoughts into writing.

Perhaps the best place to begin is to ponder the meaning of this silence and wonder. As preachers of the Gospel, we believe, and often see, the Spirit using our inadequate words to communicate the Word, Jesus. Indeed, often enough we surprise ourselves as we experience the Lord gently working through us for the sake of his people. Is it not a cause of wonder that God can use our very limited and fragile lives as an instrument for those whom He wishes to touch with His grace? For any preacher, this reduces one to silence, thanksgiving, and adoration. Perhaps “wonder” is another name for adoration.  Preaching is not only the fruit of a prayerful encounter with the Word but is itself an act of prayer and praise.

Our preaching is not merely a communication of our knowledge about Jesus and our faith, but it is rather our testifying to what we have really “seen and heard.” As preachers we witness that God is God and has become flesh in our own life experience. In fact, this is the reality underlying everything, even our own fragility and sin. It is the wonder that the Incarnation did not simply occur in Jesus, but that through the Holy Spirit the Word continues to become flesh in our own lives; the Word becomes incarnate in our unique personalities. Our lives truly have a Marian dimension to them: human bearers of the Word by the grace of God. Like Mary, are we not reduced to a pondered silence and wonder?

Dominic’s life embodied preaching; it was not merely something he did. The Word of God had “touched” his very being in and through his family life, his time in Palencia as a student, through his friends, through the situation of the Church and world at the end of the 12th and beginning of the 13th centuries, through his hopes and in his disappointments. Through all these circumstances the Spirit hovered and touched Dominic Guzman in his unique gifts and talents, sensitivities and fragilities, graces, and sins. The Holy Spirit becomes incarnated in the uniqueness of each person and thereby manifests God uniquely and differently. God loves diversity since only in diversity can God approach visibility. The mystery of the Incarnation was not a once and for all deal, but continues in and through the Church, in us and in the midst of the world. This is what we see in the saints and particularly today in and through St. Dominic, a preacher who is our father and brother, a friar preacher to friar preachers.

What might we draw from reflecting on our brother, Dominic?  First, I believe we ought to recognize a need for a faith that is alive, active, and always working. What does it mean to believe, to really believe? In confronting this question, we might need to admit that too often our faith is taken for granted and therefore its exercise becomes rather dormant within us. An active faith is the door that opens us to God who desires to give to each of us His whole self all the time and everywhere. God is not stingy with His grace. Rather God presses in on us, seeks us out, especially in our worst moments. It is the infinite God who works through our successes and joys, but even more through our failures, disappointments, limitations, and doubts. So often I find myself critical of others, of the community, the church, or whatever. This “judgement” fails to believe that the presence and work of God just might be greater than what I think, no matter how profound.  Perhaps God is at work in the midst of failure, whether it be personal, communal or ecclesial. When I sense that my prayer is a waste of time, empty, or fruitless, it may be the time in which God is most active in the center of my life than at other times. Yes, we know this intellectually, but knowledge is unable to move us beyond ourselves. Only an active faith in God’s passion for communion with us will move us forward.

Second, the correlative of this faith invites us to see that the fundamental presence of God is God “within us.” I think Dominic experientially lived out of this awareness. He could not leave the comfort, the community, the prayer, and the solitude of Osma for the fields and chaos of Fanjeaux and Carcassone without the awareness of God living and at work within him. He physically moved into chaos, deeply aware of his inadequacy, believing that God was with him and would sustain him in that call. We can easily speak of the indwelling, but this indwelling is meant to be living and operative in our lives and decisions. Dominic had to find a community among those to whom he preached, a deeper solitude through a more profound communion with the God who indwelled him. The God who dwelled within became his dearest friend and empowered him to befriend others, and finally to befriend what would become an Order of Preachers.

Third, it seems to me that we might best view our life as preachers, who have received the same charism as Dominic, as a great adventure. An adventure holds within itself a dimension of the unknown. I think of those who go on pilgrimage to Compostela, or those who have gone on the wilderness adventures into the mountains of Wyoming and Colorado, there is careful planning, but it is the unknown that calls. There is the adventure of exploration and responding to unknown circumstances that cannot be planned for ahead of time. Isn’t this an image of Dominic’s life? He could never have anticipated that which God ultimately worked through him. It was the quality of “not clinging” to his preconceived plan, of not clinging to Osma, of not clinging to his way of thinking of how the brothers should live. Detachment, which in turn requires humility, yields that far greater gift of freedom, above all a freedom from an enslavement to my will, my knowledge, my wants, and petty expectations. It is a freedom that is hard won but opens one to an adventure that is incredibly beautiful and so worthwhile, so much better than any adventure I might plan.

Indeed, brothers, let us ponder the “holiness” of Dominic on this 800th anniversary of his death, but ponder his life in a way that makes our lives richer as “preachers of grace,” moving forward in freedom with great confidence and a quiet joy deeply believing that God dwells among us and within us, enabling us to live and speak about what we have “seen and heard.” 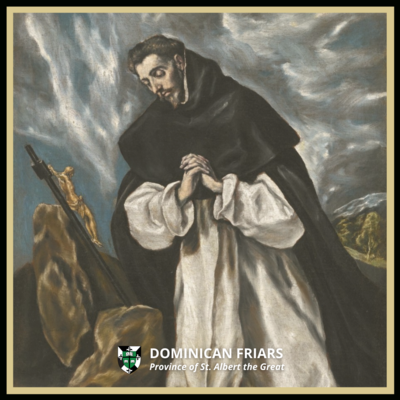