The Dominican sponsored St. Martin de Porres Center in Fativ, for many years, has been caring for socially disadvantaged children: orphans, street children, sick children and children from disadvantaged families.

Since April 2014, when following Ukraine’s Revolution of Dignity Russia annexed Crimea and launched aggression in the East of Ukraine, the fighting in parts of the Donetsk and Luhansk regions (collectively called the “Donbas”) between the Ukrainian Army and Russian-backed militia and regular troops has been ongoing.

Since the start of hostilities in Eastern Ukraine, the Center has opened its doors to children whose childhood has been poisoned by war.  Anya(8):“When I was about 5 years old, for 2 years we constantly had to go down and sit in the basement for long periods”.  Sergey (15):“Many left there (from the combat zone) for 1-2 months. Some came back, some didn't. We didn't have the opportunity to leave, we have a house there. It's difficult to leave your home." Svitlana (chaperone who came with the children): “The children are being rehabilitated and a spark of life, of joy appears in their lives. Where they live everything is in ruins … There are families so poor that they do not even have electricity. Here they get so infected with this positive energy and they tell their parents about it. This is something new for them.” The Martin de Porres Centre has adopted more than 220 children from the combat zone, and offered them psychological and spiritual support and the opportunity to recover in a safe environment.

As we prepare for Christ’s birth in a manger, may we see the sign to all of us of the plight of orphaned and affected children victims of Russian oppression and war in Ukraine.  May we have the compassion to raise our voices of solidarity throughout the Dominican Family to open our eyes to those who live as strangers unjustly forced from their land in Crimea and Donbas Region of Ukraine. 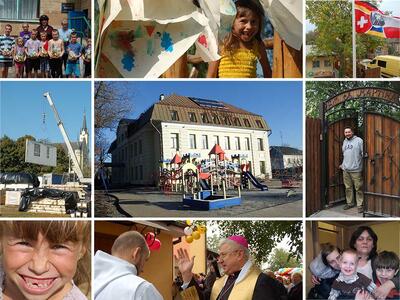