As we remember the Dominican Month for Peace in Ukraine in Advent….

Dominicans have a long history of presence in the country. History of Dominicans in Ukraine is almost as old as the Order. Since the early thirteenth century, when the first Dominicans arrived in Kyiv, the history of our Order has been mingled with the history of Kievan Rus. The Dominican Province of Rus, an administrative unit within our Order that included much of today’s Russia and Ukraine, existed until the end of the Second World War. At that time, many Dominicans were expelled from the Soviet Union. Others were executed. Sometimes entire communities were killed at once.

After being suppressed in the Communist era, the Order was reestablished in Ukraine in the 1990s. Now the Dominican Family in Ukraine comprises 25 friars in seven communities, 18 sisters from four congregations in five communities, 82 laity in seven cities, and six groups of Dominican Youth Movement.

The war with Russia and separatists still rages in the eastern Donbass region since April, 2014. People throughout the country feel the impacts of the war.

Dominicans are very involved in several processes and projects that promote peace and accompaniment of victims of the conflict. In 2018–2019, an International conference took place in France and Ukraine consisting of four seminars focused on "What peace plan is possible between Russia and Ukraine?".

Visit the Dominicans of Ukraine for more info on our friars and history of Dominican presence.

Today we hear from the Prophet Isaiah, "A voice of one crying out in the desert: ‘Prepare the way of the Lord" (Mk 1:3).   As we pray in our second Sunday of Advent for the people of Ukraine around the world, may we pray for the way of transformation and the work of the Dominicans who seek respect and dignity in Ukraine and its occupied region. 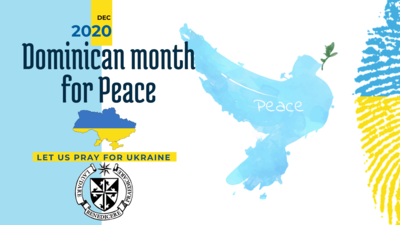